Wontiga (ウォンティガ?) is the Sacred Beast of Wind in Tales of Rebirth. He is a white, tiger-like beast with armored wings and a mask concealing his face.

Wontiga is one of the six Sacred Beasts, known as the "Six Saints", who served the Sacred Beast King, Geyorkias, long before the events of the story. Each Sacred Beast possesses an arcane power, Wontiga's being Wind. At some point in the past, the King and his Six Saints came into conflict over opposing ideals: Geyorkias believed they should eradicate all Huma from the world so that the racism and hatred between them and their fellow race, the Gajuma, would cease, as Huma had undergone a marked cultural development and waged war against the Gajuma in an attempt to subject them to the Huma's rule.

The group manages to reach Wontiga's shrine in the Beo Plains after borrowing a ship from the Calegian army. Recognizing the tower as rising into the clouds, as well as having discovered the Tower of Nereg not be related to a Sacred Beast, the group enters the shrine and is greeted by Wontiga's voice, which questions their intrusion. Eugene Gallardo explains how they are attempting to purify the impression that threatens the world, and Wontiga then questions their resolve, instructing them to show him their determination. He informs them that, if their determination proves to be genuine, then he will bestow his power of Wind to them.

Further inside the shrine, Annie Barrs begins hallucinating, indicating that this is her trial. In a flashback, she appears in Calegia Castle and hears her father nearby. The next flashback then shifts to the following scene, in which Annie's father, Barrs, has just died, and Eugene is arrested for his death. In the next scene, Annie witnesses Eugene being affected by the impression, strengthening her distrust of him. However, Annie begins to see through the hallucinations and attempts to convince herself that Eugene and other Gajuma are not hateful by nature. The following flashback depicts Annie's introduction in the story, in which she attempts to kill Eugene on the outskirts of Minal in revenge for her father's death.

Finally, at the top of the tower, in the final room of the shrine, Wontiga appears before the group and introduces himself before presenting Annie with the final part of her trial. In the last flashback, Annie is shown the true event of her father's death, how Eugene killed him in self-defense after Barrs attacked him. Annie comes to understand what her father meant when he said that there was no color in life, and she abandons her hatred for Gajuma from this point forward. Wontiga accepts this as Annie passing her trial and bestows upon her the power of Wind. As the group leaves the shrine, Annie apologizes to Eugene in a dramatic moment, agreeing to help him in discovering the truth behind the day her father died. 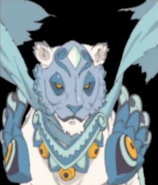